Morning! Hope its been a great weekend for all of you. Mine was pretty good. I stayed home for most of it since it rained for most of it and still continues today.

Showing lots of pictures today featuring two designers that are participating at The Epiphany.

Ariskea with the Noel gacha and a fairly new brand by the name of KOPFKINO, which has the God Jul gacha.  You will find all the items used in the credits below and also the link to the gacha keys.

The landscape that I’m using in the background for my winter scenes are Studio Skye and Little Branch.

Hello everyone.  Just a quickie today as my time is short, but I wanted to get this posted. Find all the details below and have an awesome day!

It didn’t here! It’s cold and we’ve had a little rain already this morning.  I guess it’s a bit of a teaser for what winter will be like.  I’m back with another amazing and huge home.  This time its the newest release by Onsu.  The following is straight from the creators Flickr, which I urge you to check out for more details on the house and for you to view the other great products this store has to offer.

“The “Magnolia” is a classic, single-floor, 3 Bedroom 1 Bathroom suburban house. The exterior maintains a traditional style, with a bay window featured prominently in the center and an entrance set inside an alcove.”

I have one other large build to showcase, but will be putting that off for a few days as I’ve got a large amount of decor to show all of you.  Though I hope you’ve enjoyed the showcases of homes and just one example of how you can landscape around it.

Enjoy the rest of whats left of the weekend. ♥

Today it’s back to showing another great build. This Madison woodlands cottage home is by [Tia].  It’s truly an amazing home for this time of year and the details and texturing are just so realistic.  Visit her Flickr for lots more details on what you get with this amazing home.

Apart from the cottage, the Madison collection has several pieces of furniture and trees as well. These couple of closeups pictures only show some of the items, but you will appreciate them better in person really, so go check them out.

Enjoy the rest of your day.

Next home is a beauty as well so stay tuned.

Yesterday, while in the middle of doing this scene Second Life decided to be a pain and kicked me off.  After several attempts of trying to log back on I finally gave up and decided an early night was calling.

Today’s post is to showcase another great home.  The Tatum Cabin is by Trompe Loeil and currently at Uber.   From the creator’s own words, “…is a two story, wood shingle and plank cabin with an open floor plan and private upstairs level. The flagstone base wraps around to embrace the stairwell tower, filled with light and windows, that leads to the landing and the private fireplace above. Front and back covered porch, interior and exterior lighting (including stairwell chandelier), privacy windows, locking doors, and our *home control system round out the features! Plus, grab the matching Snow Add-On for wintery decor versatility when the temperatures drop!”  For more pictures, visit her Flickr here.

I’m also featuring a new tree by Little Branch.  The White Ash Tree is seasonal, so click it to pick your color.  It’s 100% mesh and it’s animated, so make sure you go pick up your own at Uber!

It’s a new month and that means an onslaught of new events.  I have 3 additional builds to show, so stay tuned!

Hello everyone!  I’m going to post a second time today as it’s ready and this week is a short one for me.  That means I’m having to pack in a lot to make up for the lost time and every day seems to brings its own challenges and I rather post now in case tomorrow I don’t have time.  I appreciate each and everyone of you who just stop by and click like, make a comment or even read my short words or just enjoy my pictures.  I think they tell a story of their own.  Plus you always get a bonus with my amazing list of credits. I’m teasing. ♥

If time permits and I am not so tired at the end of the day I’ll be showcasing a parade of homes in the coming days as I have 3 fabulous builds to show you all.

In the meantime check out my first home of the week, which is another fantastic home by DaD -Virtual Living- currently available at Uber.  For more details on the house and additional photos, please visit DaD’s website.

Over the weekend I had two aunts that came to visit and they were loving the fall leaves on the ground from the big tree that sits in front of the house.  It was one of the things that I was looking forward to when I moved to the north central part of the state, here in Florida.  It was having a fall season and being able to see the leaves change on the trees.  It’s also cooler weather during the winter season and sweater weather is comforting as is hot cocoa.

Today I am introducing a new brand called Aloe.  It made its debut at Collabor88, which if you’ve been around a while you know it’s one of the premiere shopping events of Second Life.  Lots of options with the items she brought us, the trees, pumpkins and tombstone. Make sure you check her out.  I’m also showing the new gacha collection by JIAN at the Epiphany.  More pets for you to go crazy with and these spoiled rotten rotties are adorable. The gacha key can be found here.

New round of Blueprint is open and one of the things you can find is the pumpkin fall gazebo by Merak, great for this season of pumpkins, spice and everything nice.  The cottage is a new release by Trompe Loeil, out now at Collabor88.  I’ll be featuring it again with some inside scenes.

Enjoy and stay tuned for more.

Hello everyone.  I’m showcasing the newest release by Scarlet Creative.  The Magicae House is actually a collaboration between Scarlet Creatie and Hive, the latter having made the kitchen inside.  I hope to feature that soon.  This home is available until 7th November at the mainstore for just 188L, and it’s available in three colors.

Hello everyone.  I’m doing a second post today to showcase items from both Salem and the Arcade.  I have to confess that I’m not a big fan of Halloween, so I’m a little challenged in coming up with these scenes.

Though hope you enjoy them! 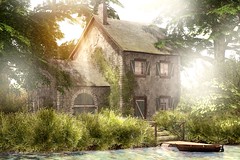 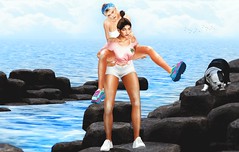